Tum "Darkblade" Thumble was one of the founding members of the then un-named Ätlän-tã Fælcons, and was the first player character to die permanently. He was an optimistic hero, and, some would consider, the heart of the party. He was killed when the Angel of Death paid $1,000 to the Kickstarter, and was rewarded by choosing a player character to kill off.

Not much is known about Tum's early years. He only remembered that the village he lived in was attacked by "winged beasts". He was sent to an orphanage for some time, but escaped to live as a street rat on the streets of Caer. Here is where he learned to steal and be rouge-ly. On the brink of starvation, Tum was saved by a Darkblade, whereupon, he began to respect and admire the Darkblades. Another group he admired was that of House Thumble. Lord Trant Thumble and his band of "children" seemed an impressive club to join, and Tum singed up for a great tournament that would recruit future Thumbles. He was made to fight, and was very nearly killed, only being saved at the last second when an "unknown man" gave him an amulet that allowed him to win. He was accepted by Lord Trant, and became a Thumble himself. Unfortunately, being a Thumble proved to be a strenuous and less than ideal life, and Tum grew resentful. He decided to join the Darkblades, the group that he'd looked up to for many years. In order to join the Darkblades, Tum was tasked by Footpad Calor to steal the legendary sword Blood Drinker from his adoptive father. He was unable to successfully complete this task, however, as he was promptly abducted by Lord Milnor, had a strange device put into his head, and placed tied up on a slab...

Upon awaking, Tum discovered, along with Aludra the Dwarf, Thom the Dragonborn, and Junpei Iori, that he had no memories of his past life. He only remembered his name, partially, as he imposed the name "Darkblade" as his own surname, calling himself "Tum Darkblade". He also remembered how to do some of his more Rogue-ly abilities. Together, the newly formed group escaped, and soon learned that the devices in their heads were bombs that would soon go off and kill them. They had to get to Caer where a Cleric of Erathis, Fennekin lived. The group made it to Mastwick, where they are surprised to find that Tum and his friends were accepted into the city, as the guards called him "Lord Thumble". Tum was slipped a note that told him to meet at a bar without his friends, and he slipped away to meet his old Darkblade contact, Footpad Calor, in said bar. Calor filled Tum in on some of the gaps in his memories, and reminded him of his mission to steal his father's sword, Blood Drinker. If he could do that, he would be made a Darkblade, finally. Tum brought the information back to the others, and together, they found a ship (later to be named the Chum Guzzler), and sailed off to Caer to get Blood Drinker.

Once in Caer, the party headed to Lord Trant Thumble's home, Castle Greyskull. They were met in the streets by some of Tum's brothers and sisters, other children of Trant Thumble. They fought briefly, and the Thumbles overpowered the party, knocking them unconscious and bringing them to the dungeons of Castle Greyskull. After waking, Tum was informed by Trant that he had to once fight to win back his place in the family. He did, and won his place back in the family. Trant forbade them from seeing Fennekin in the Temple of Erathis, but they totally did anyway. Fennekin informed them that he would be able remove the brain bombs, but not before they collected three artifacts for him: The Whip of Binding, The Orb of Endless Power, and The Brazier of Worlds. The party headed to the library to learn what they could about these artifacts, and then went back to Castle Grayskull to finally steal Blood Drinker. Which they did, with some trouble. They met once more with Footpad Calor to hand over Blood Drinker, and Tum is finally made a true Darkblade. Also, at this time, all of his memories return to him.

After Caer, the party absconded back to their ship and, after some detective work, discovered the location of a magical compass, which would point them to the first of Fennekin's artifacts, The Whip of Binding. The compass was in the Cursed Cave, and inside was a grim and frozen place. It rested on top of a frozen lake. At the center of this lake, there was a chest lying at the base of a heavy statue. Inside the chest was the compass and a mysterious scroll. Tum was the one to grab these items, and Tum was the one who was grabbed by the statue which then sank into ice, which in turn, immediately froze over. The other party members discovered that the scroll would turn any water that flowed through into into clean air. They broke the ice and handed the scroll to the drowning Tum, and he was able to breath again! Unfortunately, the scroll malfunctioned, and when Tum exited the frozen lake, the air he breathed began converting to water. He drowned there, in his friends' helpless arms. It was all pretty fucked up.

Many years later, during the Winter Solstice, the remaining members of the Ätlän-tã Fælcons met with the ghost of Tum "Darkblade" Thumble once again. He told them that there was a plot to pull all of the magic out of the world, and he assisted them in stopping this plot. During this time, it was revealed that there was a darkness to Tum. He told the others that there was no D&D Jesus. It was just hell. He could still feel the cold pressing in on him, for eternity, as they never brought his body back up with them. 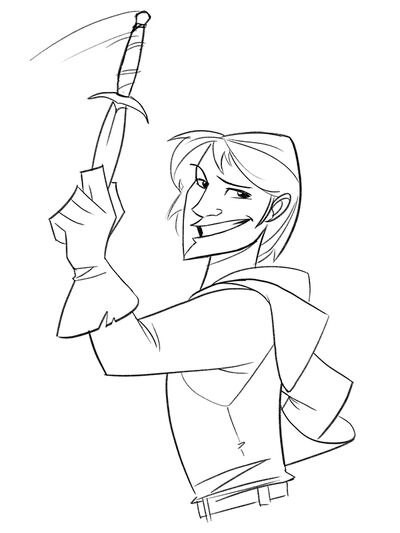