Ros was a former assassin/prostitute who later became captain of the Chum Guzzler, the boat of the Ätlän-tã Fælcons. They rescued her from slavery and she quickly became indispensable to their operation. Ros often handled the business end of things, making deals and organizing the day-to-day affairs of the boat and the party's money. As of Episode 347 - The Gremp, she has been out searching for the missing Aludra and Jaela.

Not much is known about Ros' early years. She had a sister, named Pirta, and a bit of a dark past, living a life as a rogue and a thief. At some point, she became a prostitute, but it varies on whether or not this has been retconned. Later on in life, she became a little more tame. Somehow, she became the captive of Captain Hookbeard aboard what would come to be known as the Chum Guzzler...

After being saved by the Ätlän-tã Fælcons, along with the rest of the slaves, Ros became the liaison between the others and the Fælcons, relaying questions and suggestions between them. When it came time for the Fælcons to deboard the ship, they left Ros in charge, as she was the most capable and able to keep a level head. Eventually, the Fælcons decided to set up a sort of shipping empire, where Ros, as captain of the ship, would facilitate trades and smuggling deals, and use the Chum Guzzler to transport goods and services, ostensibly to earn money for the Fælcons.

For a while, Ros was in (what appears to be, despite what you would think) a monogamous relationship with Thom Vidalis. She did give him VD though. The two grew close over the death of their mutual friend Tum "Darkblade" Thumble, and would often share nights together in her cabin with a bucket of fish. It's best not to ask.

After the Fælcons adopted a young Githyanki boy named Bucky, they would often leave him behind on the ship, as their adventures grew too dangerous. During this time, Ros would look after the boy, and the two became close. Bucky would often think of Ros as more his mother than Aludra Wyrmsbane, his actual adoptive mother (though Bucky once described her as "kind, but not nice").

At some point before the Demon Apocalypse, Fennekin kidnapped Ros' sister, Pirta, and commanded Ros to assist in his plan to murder the Ätlän-tã Fælcons. He would detonate the Brain Bombs in the heads of Aludra Wyrmsbane and Thom, and then she would stab Lord Titus Harper through the heart. In return, he would free Pirta.The plan worked perfectly, except for the fact that Fennekin killed Pirta anyway. Ros was spared, and escaped. Later, after Erathis brought the Fælcons back to life, Ros reunited with them aboard the Chum Guzzler, and she and Harper argued, understandably. Eventually, however, Harper forgave Ros, and the two were able to bond over their mutual kidnapping and loss of family. The newest addition of the Fælcons, Jaela, felt particularly hostile toward Ros, a feud that continued until Jaela and Aludra's bachelorette party.

After traveling with the party for a while, she agreed to go off in search of Bucky and the crew's donkey friend, Daisy, neither of whom had been seen since the Demon Apocalypse began. It is unknown what happened during this time, but occasionally, Harper would send Messages to Ros. At first, she reported that they were in trouble near Fairmire, and she was trying to rescue Bucky from the Gnolls. A couple weeks later, they communicated again. This time, Ros admitted that they were all kidnapped by the Gnoll Demons. This was the last they herd of her until they reached Yeenoghu's Moving City. The entered the Temple of Yeenoghu and found Bucky had been corrupted by the Skin of Yeenoghu, as had Ros and Daisy. The other's had turned demonic and scary-looking, but Ros looked basically the same. She just had red skin and horns. Once Aludra was able to get the skin off Bucky, things returned to normal, and Ros looked like herself again.

Ros was the one who urged Thom to get his sword Blood Drinker back from Jaela, after she took it. He did. Despite her dark and salty nature, she was able to get through Avery T'léas' Warding Circle surrounding the White Dome outside of Fairmire, though there was a tense moment of uncertainty before she stepped through. After being teleported to Mastwick, and hanging around there, Ros refused to leave Bucky when the rest of them suggested that Ros stay while the rest of them, Bucky included, head to the Barony of New Stigia. They all went there, which turned out to be Shadowspar Keep. When Thom and Aludra were killed (again) by Slaad tadpoles, Ros and Jaela were the first to react. Ros found Adira Harper, who was running the place, and was able to save them, and bring them back to life. She stayed behind in New Stigia as the others went to take out the Army of Bahamut.

Ros appeared again during The Battle Above the Abyss, along with The Coven, and a herd of Pegasi, including Princess Ivy Bluemoon. She looked on in horror as her lover, Thom, sacrificed himself to kill Fennekin and end the Demon Apocalypse.

Master of Coin/Master of Whispers[]

After the Demon Apocalypse, during the time of peace and healing, when Harper became king of Pelor's Hope, Ros was appointed as his Master of Whispers, secretly obtaining information, and finding things out about people, which she would relay back to the king. To keep her identity a secret, a dummy Master of Whispers was appointed, and Ros' official position was that of the Master of Coin. She was tasked with finding Longcryer, the wizard who tortured Harper to unlock his sorcerous powers. She was successful, and was able to infiltrate Longcryer's Tower to gather information, before she was spotted and escaped. Harper had given her a necklace that would instantly teleport her to his location, and she used it to teleport into Deephome, during The War of Wyrmsbane Keep. She told Harper that she had found him, before passing out. After the war, Harper convinces his allies to go to Longcryer's Tower, and Ros leads them.

Ros is one of those who notice that Harper acts strangely when he mentions Longcryer, so she speaks with Aludra, and the two agree to keep an eye on him. After questioning the surviving orc of a raiding party, Ros suggests that Bucky be the one to kill it, so that he can grow up and become stronger, but he is unable. Harper does it. Jaela approaches Ros as they all approach Longcryer's Tower, and offers a truce, which Ros hesitantly accepts (though she later tells Aludra that Jaela is acting strange as well). Ros stays outside with Bucky as Aludra, Jaela, Jett Razor, and Harper all enter the tower fight and slay Longcryer.

After Harper's death at the hands of Longcryer, the others leave the tower to reunite with Ros and Bucky. She is horrified to learn of Harper's fate, and accompanies Erynn Colleen, Marlamin Windlore, and Bucky back to Pelor's Hope to deliver the news of the king's death to the queen, Ashayara Dayne. All four of them were arrested and thrown in the dungeons, with Ashayara Dayne swearing to find the rest of the Ätlän-tã Fælcons, feeling that they are to blame for Harper's death. Eventually, they, too, were arrested, and put on trial, where they were able to convince Ashyara Dayne, not that they were innocent, but that they had much bigger fish to fry... She agreed to free them all.

It is unknown what happened to Ros after this. Presumably she remained in Pelor's Hope to rule as Master of Coin/Whispers to Queen Ashayara Dayne, though this is unconfirmed. We next see her at the bachelorette party of Jaela, where the two faced off in a race of dinosaurs. They seem to make up with each other, though there are still the occasional under-the-breath comments at the other's expense. 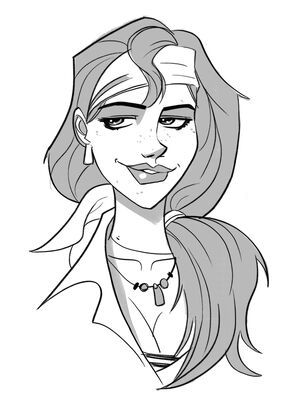